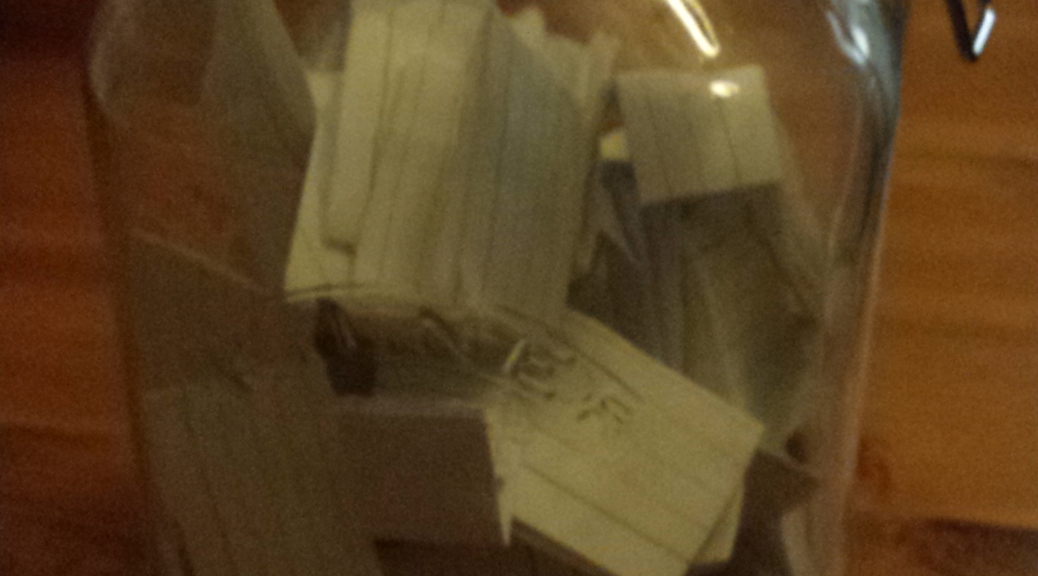 I’ve been neglecting my little page a bit lately but a stressful few days have gotten me in the mood to sit and write something. There’s something about getting motivated and creating a thing that didn’t exist before I sat down and started typing, that always manages to make me feel a bit better. A bit less useless. It let’s me tell this wonderfully persistent, naggy brain of mine that in fact, I am kinda good at shit.

So I was thinking today, as I do most days along with 7 zillion other things, about how very fast this year is zipping past and the fact that it’s almost 1/4 of the way through already. Oh screw it I’m going to say it, we’re nearly 1/4 of the way back round to Christmas guys! It’s almost Easter. My 25th birthday is in just over 10 weeks. It’s almost a year since I bound and submitted my dissertation. It’s Spring already.

Just to state the obvious for a second – humour me here and pretend you hadn’t already noticed – one of the various obsessions that my clinically anxious mind likes to have repeated dalliances with is the notion of just how fast the time around which we choose to structure our lives likes to flit by, leaving us staring after it like a hungry dog who’s just watched a butcher run past (inexplicably but it’s a metaphor, go with it) with a string of sausages dangling  over his shoulder; but realises pretty sharpish that he’s tied to a lamppost and has to sit and watch as the juicy sausages fade into memory.

The point is, the year is flying by in the same whirlwind fashion that all of it’s brothers before have done before and all it’s successors will continue to do.

So I think it’s time to stop for a minute and take stock of the year so far. It’s been a big 3 months, and an exciting 3 months. Actually taking a look back at it serves to make it feel a lot less short; it feels good to realise how much has happened in that time. To name a few, one of my best friends and my older-little brother both passed their driving tests. Another bestie started her lessons and another one conquered her nerves and re-started them after a long break. My Mam, another of my best friends and my older sister have all made drastic changes to their lifestyles that they’ve wanted to make for a long time, and are already healthier, slimmer and happier. My big sister started her Nursing degree (yesterday, actually) and is a big step closer to achieving the career she’s always wanted. Another very good friend of mine had an easel built for her by her boyfriend and started to paint again (which is great news for everyone). I’ve had various blog posts shared by prominent mental health organisations and started blogging for the website of a fantastic local (for now) organisation. I’ve also signed up and been in training for my first ever running event.

So it’s safe to say I’m one very proud lady, with a lot of great people in my life. I’m also more than a little bit sentimental in character, just in case I didn’t state the obvious enough earlier.

So as previously pointed out I’m a major over-thinker and a lot of the time this can make it hard to be positive and upbeat about things because I’m always finding something to worry about. Sometimes it feels like there’s a sunny, positive, probably pretty annoying person inside me trying to burst out, but she’s held back by frustratingly obsessive worries and anxiety. Last year this finally drove me to undergo Cognitive Behavioural Therapy (CBT) and it was very helpful. CBT is not about delving into your childhood to figure out the hows and whys of the way you feel. It’s much more about learning how to regain control of your thoughts in order to be happier and, for me, more productive. One of the things I learned a lot about is just how closely our thoughts, feelings and actions are linked and how to employ actions to take back some control of what you’re thinking and in turn, how you feel. 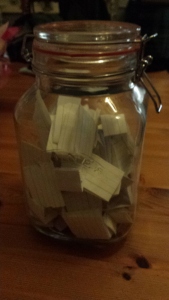 But you know what, it works! I have a hell of a lot to be positive about and although I recognise deeply all those reasons to be positive and I think about them all the time, sometimes my brain doesn’t like to let me really feel as positive about them as I want to. So the idea is that by making a point of doing this every night, I’m reinforcing my sense of how positive my life is, by acting on it.

I guess I’m sharing this because as simple as it is, I have felt a positive affect from it. It can’t fail to make you look at things a bit more positively when you realise how easy it actually is to think of something good from every day; and I’d recommend it for anyone who sometimes finds it hard to feel as positive about life, as their probably-pretty-great life should allow.

And if you’re anything like me, feeling more positive about what you do have will motivate you to work harder on achieving the things that aren’t in the jar yet!

I’ve been having a look back through my jar tonight and it turns out I’ve got a fair amount to feel good about! Here’s a few of my examples picked at random, just in case you’re interested…

“Booked up for Primrose Valley with the fam in the Summer. First time in 4 years, can’t wait!”

“Celebrating Tamara’s 25th in Hertford, catching up with uni mates”

“Chilling with Ethan (my nephew) in bed, doing some writing”

“Amazing dinner at Laura and Gary’s with the gang!”

“Had a great day fundraising with Nicole (my niece) and made loads of money! Nicole and I wrote her first ever blog post, too!”

“Spent a couple of hours at Aunty Marion’s looking at pics of Grandma and Grandad at my age! Great to talk about how they were as Grandparents and learn about them as a young couple”